Difference between revisions of "Main Page"

Our objective with this project is to create infrastructure that will provide comparative trait analysis tools easy access to algorithms powered by machine reasoning with the semantics of trait descriptions. Similar to how Google, IBM Watson, and others have enabled developers of smartphone apps to incorporate, with only a few lines of code, complex machine-learning and artificial intelligence capabilities such as sentiment analysis, we aim to demonstrate how easy access to knowledge computing opens up new opportunities for analysis, tools, and research in comparative trait analysis. As driving biological research questions, we focus on addressing three long-standing limitations in comparative studies of trait evolution: recombining trait data, modeling trait evolution, and generating testable hypotheses for the drivers of trait adaptation.

More information about this project, including participating PIs and funding, can be found at its project website.

Ontology-enabled reasoning across phenotypes from evolution and model organisms

Our overall objective is to create a scalable infrastructure that enables linking descriptive phenotype observations across different fields of biology by the semantic similarity of their free-text descriptions. In other words, we are trying to make descriptive observations amenable to large-scale computation so that they can be subjected to computational data integration and knowledge discovery techniques in ways similarly powerful as the techniques we are used to for numeric, quantitative observations.

Our approach to accomplish this centers on transforming descriptive observations from the natural language text form in which they are typically reported, to fully computable logic expressions that utilize terms from shared ontologies. We create these expressions (which we also call "annotations") for evolutionary phenotypes reported in the systematics literature, typically in the form of character state matrices. We use the Entity-Quality (EQ) formalism to compose these expressions, which was initially conceived for making biomedical and mutant model organism phenotype observations interoperable.

We combine the EQ annotations we create for evolutionary phenotypes with the EQ annotations created for the myriad of phenotypes observed for mutant model organisms in an integrated knowledgebase (essentially a triple-store). We then apply Description Logic-reasoning to evaluate which evolutionary phenotype transitions can be inferred as semantically similar to which mutant model organism phenotypes, and vice versa. Since the genetic cause of a mutant phenotype is usually known, the links between evolutionary and mutant phenotypes identified in this way can be used to construct testable hypotheses about the genetic correlates or causes of evolutionary transitions. 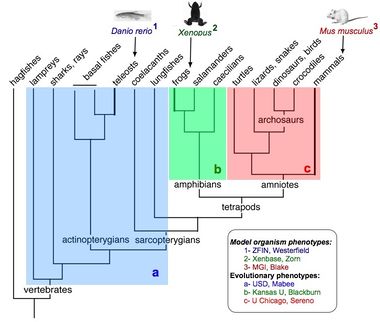 In a previous project, titled Linking Evolution to Genomics Using Phenotype Ontologies, we developed a working prototype as a successful proof-of-concept, using teleost fishes for evolutionary phenotypes and the zebrafish model organism as a source of mutant phenotypes. Here, we aim to make the components of the prototype, including tools and workflows, sufficiently scalable so that they are adequate for the much more extensive volume and more diverse nature of skeletal phenotypes across all vertebrates, fossil and modern. Specifically, our aims encompass the following:

In addition to a web-based interface, we will make all data, including the integrated knowledgebase, available in the Web Ontology Language (OWL), so that other researchers can reuse the data in as many ways as possible.

The evolution of limbs from fins is arguably one of the most well studied transitions in vertebrate history. The genes involved in positioning, growth, and patterning of the fin and limb at various stages are well-known and documented in the vertebrate model organism databases ZFIN, Xenbase, and MGI; changes in skeletal morphology and corresponding assertions of homology are well-documented in the comparative morphological literature. Bringing together the genetic, developmental, morphological and evolutionary data in the Phenoscape Knowledgebase will provide an ideal test bed for judging the reliability of candidate gene predictions and the application of homology logic.